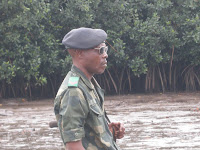 Paid soldiers are happy soldiers. Unpaid soldiers can wreak havoc. Joseph Kabila would be wise to not forget this golden rule of political survival.

Radio Okapi and other media have reported a mutiny of two battalions – approximately 2,000 soldiers in Marabo (40 kilometers from Bunia ) in the north east Ituri territory. The mutiny is yet another blow to the Kabila’s fragile authority.

A letter was sent to President Kabila complaining of the inhuman conditions soldiers are forced to brook and SMS messages were sent to the heads of the regional military authorities to reiterate their dissatisfaction. Their complaints read more like an NGO diatribe than a military declaration.

Major Faustin Balizana, adjunct commander of the 42nd battalion and spokesman for the rebellious troops, said soldiers continue to be poorly paid and are taken advantage of from the military upper echelons. He made explicit reference to the existence of mafia-style networks of corruption and theft of money that should go to foot soldiers.

Prior to the mutiny, approximately 30 well-armed soldiers deserted. Some headed back to their base but others are still on the loose in the vicinity of the Lubero forest.

200,000 national army troops and the majority of MONUSCO blue helmets are deployed in the east. They have not succeeded in bringing local militias, FDLR, FNL and the Lords Resistance Army under control. The political economy of plunder and blood minerals earnings are strong incentives to continue sabotaging the security landscape.
Posted by Congo Masquerade at 22:28