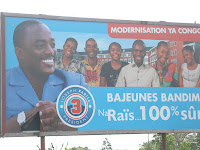 In Kinshasa and on the road to Boma, I’ve noticed that the big advertising posters that pollute the landscape are spreading a new political slogan. Kabila’s smiling face - with strangely whitened complexion - is no longer associated with cinq chantiers but révolution et modernisation. In this country where transport advances at a snail’s pace, the new posters are outrageously cynical because they associate Kabila with a bullet train network for Congo.

The development programme launched in 2008 was a flop. Just like Kabila’s strategy to call 2010 l’année sociale, it was poor political strategy to campaign on. By the time the campaign officially opened, even the government had to admit that everyone recognised cinq chantiers as empty propaganda.

One of his worst scores was paradoxically precisely where some road improvements were made: the nation’s capital where Kabila has become persona non grata. Some central areas of Kinshasa (mainly the boulevards 30 Juin, Triomphal and Lumumba) benefited from road and infrastructure improvements carried out by the Chinese but the programme has not extended into the provinces. The other priorities, health and education, water and electricity, housing and employment did not produce any results.

Presidential candidate Nzanga Mobutu who was Minister of Agriculture under Kabila declared on Radio France International that there was never any discussion of cinq chantiers during cabinet meetings, adding that the programme was thought up by the Kabila parallel government.

A well-known opposition singer Bill Clinton (not to be confused with the former US president) produced a video clip showing an exasperated father taking his son by the hand to the renovated Boulevard de 30 Juin, telling him, if you are hungry, eat that! The message is that some prestige road work does not help the Kinshasa poor and hungry.

Hatuone kitu is Swahili for ‘we don’t see anything’. It is also the title of a song sung during the electoral campaign in Bukavu referring to the fact that there were no cinq chantiers projects in the Kivus.

A mid-ranking civil servant working in the Ministry of Higher Education told me that until a few months ago, if he ever omitted mentioning cinq chantiers in any kind of project, his boss would say to him: ‘Do you want me to have problems with the Minister?’ Today, if he inadvertently does mention cinq chantiers, he is asked exactly the same question.
Posted by Congo Masquerade at 19:11