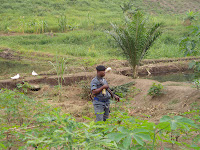 Affirming national sovereignty is a recurring pattern in post-conflict situations. It can have positive implications for regaining a sense of national unity and reshaping identity. It can contribute to the state-building process.

Nationalisation of foreign held assets is an awkward form of affirming sovereignty: awkward because it tends to be applauded by local stakeholders in a populist logic without concern for broader macroeconomic considerations, but anathema to foreign investors stripped of their businesses. Arbitration between investors that were nationalised by Mobutu in 1973 and the Congolese government is still unresolved.

Congo’s new agriculture law is a measure that could be interrupted as a means of affirming national sovereignty. But it is too early at this stage to say if it will do more harm than good. Although the law itself has been approved by parliament and was signed by President Kabila on 24 December 2011, the by-laws and application measures are still being elaborated. This could take some time: Congo’s forest code became law in 2002 but the presidential decree establishing the implementation procedures was signed in 2005.

Foreign investors are legitimately preoccupied by the law and particularly by the terms stipulated in Article 16 which says that only Congolese have the right to land. Foreigners cannot be majority holders. In an attempt to reassure current concession holders Agriculture Minister Norbert Basengezi declared that only new concessions are concerned by this provision. The provision is considered by some as discriminatory and anti-constitutional because Article 34 of the Constitution guarantees investment rights to both Congolese and foreigners.

While article 16 is contentious (there are 84 other articles), the new law has been accepted enthusiastically by most Congolese and by many international NGOs. Approximately 70% of Congo’s population lives off the land. Farmer associations - with the support of internationals NGOs such as AgriCongo - lobbied their representatives to have the law approved. Congo’s rural populations welcome the law because they perceive it as giving them greater security in what is a very ambiguous land tenure context. The importance of family farming is now recognized.

Congo’s agricultural space is going to come under increased pressure as land grabbing becomes more systematic. Land ceded to China in Equateur Province for palm oil production is a concrete example. Future opportunities for biofuel production or REDD exchanges will have to be tracked carefully if the agricultural law is to live up to local expectations.

Lack of coherence with other development priorities is a challenge. Economy Minister Jean-Marie Bulambo announced the reduction of food import duties in May 2011. Staples like meat, poultry, fish, wheat and rice, etc. – all commodities that could be produced in Congo – are given priority over local foodstuffs. The logic here is to respect consumer demands more than the needs of producers. From a political point of view this made sense in the run-up to elections.

One major but still unresolved issue is the definition of broader land use strategies that give coherence to agriculture, mining and forestry policies. Another is infrastructure development that could help Congolese products be competitive for the national market. 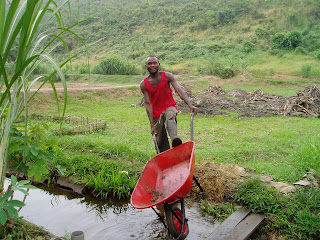 Posted by Congo Masquerade at 15:16