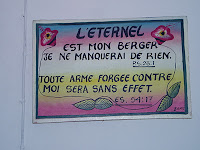 Religion has figured prominently on the Congolese political landscape since the colonial period. About 80% of Congolese claim to be Christian, predominantly Roman Catholic (50%).
The magnitude of the Catholic Church’s economic and social role is demonstrated by its capacity to provide health care and education - even after the collapse of State structures and institutions. It is also a political force: it contributed to destabilizing Mobutu through peaceful marches, sit-ins and demonstrations.
The Catholic Church has proven to be consistent and coherent – unlike, for example, most of Congo’s international partners.
Numerous prayer groups, exorcists, messianic and prophetic churches and evangelists have proliferated since the 1990s, especially in Kinshasa. These movements and individuals are popular not just among the poor: they recruit intensively among members of the political and security establishment. The spiritual leaders of these Christian ‘neo-communities’ are opinion leaders that occupy increasingly important positions of power. Methodist pastor and President of the CENI, Mulanda Ngoy is the most notable example.
Syncretic sects combine Christianity with traditional beliefs and rituals. The most popular of these sects is Kimbanguism, with around 3 million followers. Most non-Christians follow either traditional religions or syncretic sects. Witchcraft and sorcery remain important social realities.
The recent call by Congolese bishops for peaceful protests to be held next week follows an explicit condemnation of the government, referring to ‘treachery, lies and terror’ during the electoral process. Archbishop Laurent Monsengwo described the results as ‘illegitimate’ saying they 'conformed neither to truth nor to justice'.
The Catholic Church network had 30,000 election observers whose asssessment corroborated massive fraude, irregularities and intimidation.
The National Conference of Catholic Bishops (CENCO) in a message entitled ‘The Courage of Truth’ called for the mistakes made in the presidential and parliamentary elections to be ‘corrected’ without however calling for the elections to be annulled. The message also implored security forces to 'disobey unjust orders'.
The bishops challenged the members of the Independent National Electoral Commission to change their practices or resign following the mismanagement of last year's presidential and parliamentary elections.
The Independent National Electoral Commission 'no longer enjoys the confidence of the population', the bishops said, and asked the parliament to review its composition and include members of the civil society for more independence.
While some of the elements in this declaraction are not sufficiently explicit , such as ‘correcting’ mistakes, the message itself is clear. The Church – with the tacit support of the Vatican – has opted to rachet up the pressure on an increasingly vulnerable government.
Posted by Congo Masquerade at 11:37