Who is in the cockpit? 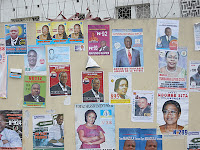 Joseph Kabila has been invisible for the past month. Self-proclaimed president Etienne Tshisekedi will reveal the names of his cabinet any day now. The CENI has postponed the announcement of the legislative results until further notice. No one knows when provincial elections that will lead to the indirect vote for national senators will take place.

Who is running the country during this stalemate? Who has been running it for the past ten years? Joseph Kabila and his allies - in the Congolese tradition of extreme political secrecy – govern by network, not by institutions. Many official figures even at the ministerial level wield far less power than shadow advisors and partners.

Who is in control?

My opinion is we don’t really know. While there are some obvious heavy weights, relations between them are as unclear as who pockets earnings from mineral sales. A coup d’état in this context of political vacuum, grumbling by the military, social frustration and regime isolation really wouldn’t surprise anyone.

The éminence grise of the Kabila presidency is Augustin Katumba Mwanke. He does not hold an official position in the Kabila cabinet but his voice in economic matters is taken seriously. Already close to Kabila père, this Katangais was behind the Congo-China deal. He is very influential in the mining sector.

Adolphe Lumanu from Western Kasai Province, Minister of the Interior and Security, is another Kabila faithful. His appointment as minister followed a term as Kabila’s head of cabinet. Lumanu had the task of announcing the suspension of Numbi following the assassination of Floribert Chebeya in June 2010.

John Numbi had been Kabila’s security boss since 2007, holding the title of General Police Inspector. This native of North Katanga was not sacked but suspended and replaced by the Tutsi general Charles Bisengimana. Very close to the president, Numbi was the architect of some delicate special operations such as the joint Rwanda-Congo military operation in North Kivu and the bloody repression of the Bundu dia Kongo political religious movement in Bas-Congo.

Kabila succeeded in placing a faithful ally as president of the National Assembly to replace Vital Kamerhe. Evariste Boshab, from Western Kasai Province, has proved his loyalty to Kabila as head the president’s party, the People’s Party for Reconstruction and Democracy (PPRD). Given the composition of the National Assembly with its various political groupings, including loud opposition voices, Boshab’s role requires finesse and a lot of political savvy. His strong support from the all powerful Katumba Mwanke facilitates his role as institutional deal broker.

Another representative of the Katanga establishment is Jean-Claude Masangu Mulongo. Governor of the Central Bank of Congo since 1997, he is one of the country’s leading economists. First appointed by Mzee Kabila, he was confirmed by Joseph. Known as the father of the Congolese franc, Masangu played an important role in reconnecting the Congo with the Bretton Woods institutions.

Katanga Governor Moïse Katumbi is a rather unique actor. Super rich businessman turned politician, Katumbi combines tough business acumen with a populist approach to governing the mineral rich province. Respected and liked by the Katangese, he supported Kabila’s bid for re-election – obviously for the sake of his commercial empire.

Kabila’s twin sister Jeannette seems to have a strong influence over the president, especially with respect to commercial affairs.

Israeli businessman Dan Gettler, active in the mining sector and generous contributor to Kabila’s campaigns, is another personality that merits special mention. He was a key figure in the selling off of state mining assets to private companies at lower-than-value prices.

Posted by Congo Masquerade at 14:12