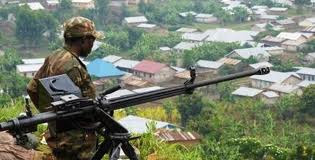 The M23’s military actions have made news recently but media coverage has been very sketchy, making it difficult to draw a clear picture of what the group’s objectives are, how and by whom it is run and where it comes from.
Here is a humble attempt at making sense of these questions. It wasn’t easy filtering the propaganda from the facts so there may be errors.
Comments/corrections welcome.


Background
The M23 is rebel movement comprised mainly of Congolese Tutsis, who formerly comprised the CNDP. The M23 defected from the Congolese army in April this year amid pressure on the government to arrest General Bosco Ntaganda. It is the newest avatar of Rwandan support for Tutsi rebellions in eastern DRC.

The drivers are access to land and mineral resources. A weak Congolese state facilitates Rwandan involvement in the Kivus. The weak state is both cause and consequence.

The CNDP was set up -and justified its actions- in eastern DRC to fight FDLR forces and protect Tutsi minorities. It also sought to control mineral extraction and access to land.

The CNDP was a political armed militia established by Laurent Nkunda in December 2006. The CNDP’s strategic underpinning was the RCD-Goma, a rebel movement during the Second Congo War (1998-2003) that later entered mainstream Congolese politics. Its aim was the overthrow of the government of Laurent-Désiré Kabila.

In January 2009, the CNDP split and Nkunda was arrested by his Rwandan backers who made a deal with Joseph Kabila. Elements of a CNDP splinter faction, led by Bosco Ntaganda, were integrated into the FARDC, Bosco with the rank of General.

Until a few months ago, around half of FARDC officers stationed in Kivu came from the CNDP. Supported by Rwanda they continued to hunt down Hutu rebels hiding in the bush, including high-ranking Hutu officers such as Commander Emmanuel who was assassinated.

Bosco Ntaganda fought with the RPF during the 1994 Tutsi takeover of Kigali. He later served as military leader to warlord Thomas Lubanga who was sentenced to 14 years of prison by the ICC in July 2012. Lubanga founded the UPC.

Bosco Ntaganda, nicknamed ‘the Terminator’, was protected by Joseph Kabila who used him to direct military operations in Kivu since 2009 against the FDLR and to facilitate illegal mineral exploitation.

Despite being sought after by the ICC for war crimes, Bosco was given immunity by Kabila. Bosco and the CNDP participated in vote-rigging and voter intimidation in favor of Kabila in the run up to the 28 November elections.

Soon after the elections, under the pressure from the international community and to appease factions of radical Congolese who were angry with the Rwandan influence in Congolese politics, Joseph Kabila decided to (i) reposition the Tutsis within FARDC to other regions of the DRC and (ii) declared his intention to arrest the renegade General Bosco Ntaganda. These were the two main issues of contention that violated the 23 March Agreement – explaining the movement’s name. Realizing that he could no longer count on Kabila’s promise for immunity, on 30 April, Ntaganda took to the bush with 600 to 700 men, some of the best of the CNDP’s 4,000 troops.

The ICC issued an arrest warrant against Bosco in 2006 for the same crimes against humanity for which Lubanga was convicted in March 2012. Lubanga was found guilty of using child soldiers in the 2002-2003 civil war in Ituri. Fighting between militias and interethnic violence over control of gold mines and other resources caused an estimated loss of 60,000 lives.

The 23 March Agreement
On 23 March 2009 the government of the Democratic Republic of the Congo and the CNDP signed a peace agreement in Goma.

Signed by Dr Désiré Kamanzi, President of the CNDP and H. E. Mr Raymond Tshibanda, Minister of International and Regional Cooperation for the Government of the DRC, under the auspices of UN Special Envoy for the Great Lakes Region, H.E. Mr Olusegun Obasanjo and of the co-facilitator of the African Union and of the International Conference on the Great Lakes Region, H.E. Mr Benjamin William Mkapa, the parties formally agreed on 15 issues relating to:

Article 1: Transformation of the CNDP (ceasing its existence as a politico-military movement and integration in the Congolese National Police and the Armed Forces of the Democratic Republic of the Congo)

Article 8: Management of the Territory (based on local sociological realities)

Article 9: Public Administration (based on the proximity needs of local populations)

Article 12: Specific Issues (including ‘Parties agree to formally recognize the ranks of former CNDP members both in the Congolese National Police and in the FARDC’)

Article 13: Economic Reforms (including ‘Parties agree to the necessity for reliable and effective good governance and … control of natural resources’)

Article 14: National Monitoring Committee (in charge of implementing the Agreement)

Article 15: International Monitoring Committee (set up to monitor the Agreement)

Support from Rwanda
According to a leaked UN Sanctions Committee on the DRC report of June 2012, M23 has received support from high-ranking Rwanda officials such as Defense Minister James Kabarebe and Chief of Joint Military Staff General Charles Kayonga and Generals Jack Nziza, Emmanuel Ruvusha and Alexis Kagame.

Roger Meece, head of UN peacekeeping mission Monusco, declared that M23 combatants speak English and wear uniforms different from those of the FARDC.

An Africa Confidential article suggests that Rwanda may not only be supporting the M23 rebellion, but may also be helping create a new state on its border with Congo. Pro-Balkanization forces have circulated the name ‘République des Volcans’.

Rwanda President Paul Kagame denies any involvement in the support of M23 or Balkanization.

Rwandan officials have been using social media networks in a lobbying campaign to improve Kigali’s position on the dispute concerning its involvement.

Military context
After days of fierce fighting in July, M23 rebels secured the economically strategic town of Bunagana on the Ugandan border prompting displacement of civilians and the fleeing of 600 FARDC troops over the Ugandan border. Having seized this key mineral transit town, the rebels proceeded to advance on Rutshuru, taking this and other towns close by. M23 forces encountered no resistance from the FARDC who abandoned their positions.

Throughout their advance M23 rebels have called for talks with the Kabila regime, stating that their aim is only to have their voices heard – meaning respect for the terms of the 23 March Agreement that Kabila reneged on.

The fighting between the rebels and the Congolese army has displaced more than 200,000 people in recent months, according to estimates by aid groups, with many fleeing to neighboring Uganda and Rwanda.

But very few officers in the Congolese army received military training explaining their poor performance in confrontations with M23 forces.

Alliances have been forged in recent weeks between various armed groups including the UPC, M23, Mai-Mai Kava wa Seli and Mai- Mai Mandefu, who have joined together in the common cause of fighting Congolese government forces. The head of a Mai Mai group with alleged ties to M23, General Kakule Sikula Lafontaine, led an assault on an army base in North Kivu’s Lubero Territory in early June.

As FARDC committed resources to fighting M23, the security situation in other parts of the Kivu provinces degenerated.

On the frontlines in the fighting between M23 and FARDC, civilians are stranded or displaced causing a new wave of humanitarian crisis.
Posted by Congo Masquerade at 17:45