What’s next in Congo? 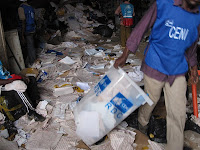 A handful of opposition protestors were shot down by Kabila’s Republican Guard over the week end while the stench of burning tires permeated the already polluted air of Kinshasa.
But the doomsday scenario didn’t unfold – at least for the moment. Fears of mass violence in Congo’s capital city of ten million hungry inhabitants appear to have been exaggerated. Congo’s demonstrators do not want to be martyrs like those of the Arab world. The fear of winding up in The Hague at the International Criminal Court calmed the tempers of both Kabila and opposition leaders.

Frustrated Congolese took to the streets from Johannesburg to Ottawa, London and Paris. Chants of ‘Tshi Tshi President!’ in the Brussels Congolese district mobilized a crowd that accused Belgium of supporting Kabila until 400 protestors were arrested Saturday night.

Kinshasa was cautiously back to normal Monday morning. Taxis were overcrowded and street vendors were out selling baguettes and plastic bags of drinking water. The heavy Chinese-made padlocks securing small businesses that had braced against threats of pillaging were unlocked.

Etienne Tshisekedi and his followers have strong arguments to contest the results. The Carter Center and the European Union observation teams documented ‘serious irregularities’ in the voting procedures and the compilation of results. Reports from 2,000 polling stations in Kinshasa were lost – Kinshasa is pro-opposition. Voter turn-out in pro-Kabila Katanga exceeded 100%! This challenges the veracity of the results.

International observers however are far less of a threat to Kabila than the Catholic Church which has also come out with a strong critique of the results. Cardinal Laurent Monsengwo said ‘official results were neither true nor just’. His voice counts in this fanatically religious country.

Kabila is in a position of vulnerability, especially in Kinshasa where his approval rating is rock bottom. Imagine President Obama being persona non grata in Washington, D.C. That is Kabila’s situation in the city that is the seat of the country’s institutions.

Tshesikedi declared himself winner. The 78 year old veteran opposition leader contributed to destabilizing the Mobutu dictatorship in the early 1990s. He is not going to bow down to Kabila or be shoehorned into a power-sharing arrangement. Stubborn and megalomaniac, Tshesikedi is also unpredictable. This explains why Western diplomats actually prefer a Kabila wearing the emperor’s clothes. Despite certain contentious issues with him – such as the lack of investment security in the mining sector – he does represent a certain sense of continuity.

It is still too early to tell what will happen in the coming days and weeks. Tshedikedi has more to win by peaceful action than by inciting street movements. The official declaration by the Supreme Court will be a non event. Kabila appointed its members so it is favorable to him. He will applaud, Tshi Tshi will cry foul. The announcement of the parliamentary elections in January will be more interesting because opposition MPs could outnumber Kabila loyalists. This would slow down the functioning of an already sluggish government even further.

Congo is heading for a protracted institutional stalemate opposing an incumbent entourage that wants to continue pillaging the country’s resources against a runner-up with a huge political ego. ‘When elephants fight’, says an African proverb, ‘the grass is trampled’.
Posted by Congo Masquerade at 08:08