Bushmeat: supply and demand in the Kongo Central Province

Bushmeat is openly traded along the highway that runs through the Luki Biosphere Reserve in the Kongo Central Province. The most commonly sold species is cane rat but red river hog and antelope are sometimes available. These pictures were taken at a roadside stand on the outskirts of the town of Kinzau-Mvuete 6 December 2020. Traders wave down drivers of SUVs hoping to make a sale.

As wildlife levels diminish in the area, families see their nutrition options change. Children are particularly hard hit because those who consume forest foods have a higher nutrient density than children who do not. An estimated one billion poor people depend on bushmeat for protein, most of the B-vitamin complex and the minerals of iron and zinc. 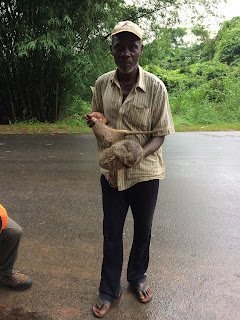 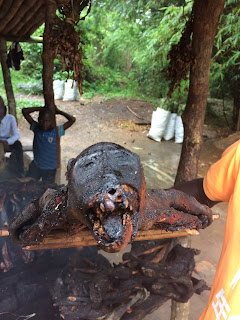 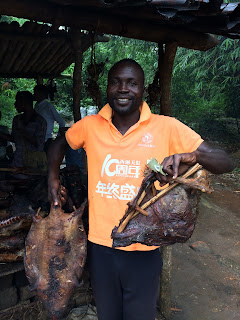 Farmers hunt cane rats, which in addition to providing cash, eliminates them from their fields. They are pests especially at harvest time as they can ravage entire crops. This is a commonly encountered example of human-animal conflict.
The development of informal commercial networks for urban markets reduces local access to meat because individuals who combine farming and hunting prefer selling wild animals for money instead of putting it into the household pot. They say 'eating bushmeat is like eating money'. A farmer/hunter in the nearby village of Kifudi reported that when he shoots or snares a cane rat, he prefers selling it to buy cheap imported chicken, fish, rice, oil and condiments.
This is a comprehensible paradox because if the family were to eat the cane rat, they wouldn’t have money to buy other foodstuffs. It comes down to selling a relatively small quantity of quality meat to a commercial trader to be able to buy a much larger stock of food that could last longer and feed more family members.
Posted by Congo Masquerade at 21:29